The reason why I shared this story is because I know what you are thinking; “Why on earth would I put needles in my face?!” and I get that, the term itself sounds cary AF but believe me, it if was as scary as it sounds, I probably would have 1) not done it or 2) passed out.

But what exactly is MICRO-NEEDLING:

According to a 2008 study, skin treated with four microneedling sessions spaced one month apart produced up to a 400% increase in collagen and elastin six months after completing treatment.

I researched this far and wide and even started experimenting with dermarolling at home back in 2018, but derma rolling at home will never be as effective and powerful as doing an actual micro-needling session with an expert.

I’ve always pretty good skin, but I did suffer from the odd breakout during my period and any time I would eat dairy products but then something happened and it turned my skin upside down. Almost three years ago, my Dad passed away unexpectedly and apart from being an incredibly shocking and devastating time, my stress levels peaked so high that my cheeks started to get covered with cystic acne (something I NEVER had before.I had no idea what to do and it took a while to get my skin back in check, but the small cystic acne scars remained.

While I was at an appointment with my amazing dermatologist Elizabeth Cook, PA-C at the Face & Body Boutique discussing some treatments for skin improvement, she brought up doing a few rounds of Micro-Needling and even though the idea was a little scary at first, I enthusiastically planned my next appointment.

Just to get it out of the way; what I had done was NOT the vampire facial, which involves taking a sample of your own blood, extracting the plasma (the liquid part of your blood), and then injecting it with needles back in your face. What Elizabeth micro-needled into my skin was PRX T33 peel to target hyperpigmentation and all around skin improvement.

THE MOMENT OF TRUTH

I arrived to the Face & Body Boutique clinic feeling a little uneasy about the fact that I was about to get needles pressed into my skin for a good 20 minutes, but I had read so much about the benefits that I was brave enough to take one for the team -my team- hahahaha.

Elizabeth is super lovely so our chatter before the procedure made me feel a lot more calm and it helped to know I was in good hands. She proceeded to apply numbing cream on my face and we waited for about 15 minutes. Then she proceeded to remove the numbing cream with rubbing alcohol to get rid of any bacteria. ( I just wanted to point out that I was indeed wearing eye makeup, but I was wearing NO makeup on the rest of me face and she didn’t get the needles close to my eyes ).

The noise of the derma pen made me a little nervous but I took a deep breath in and told Elizabeth; I’m ready! 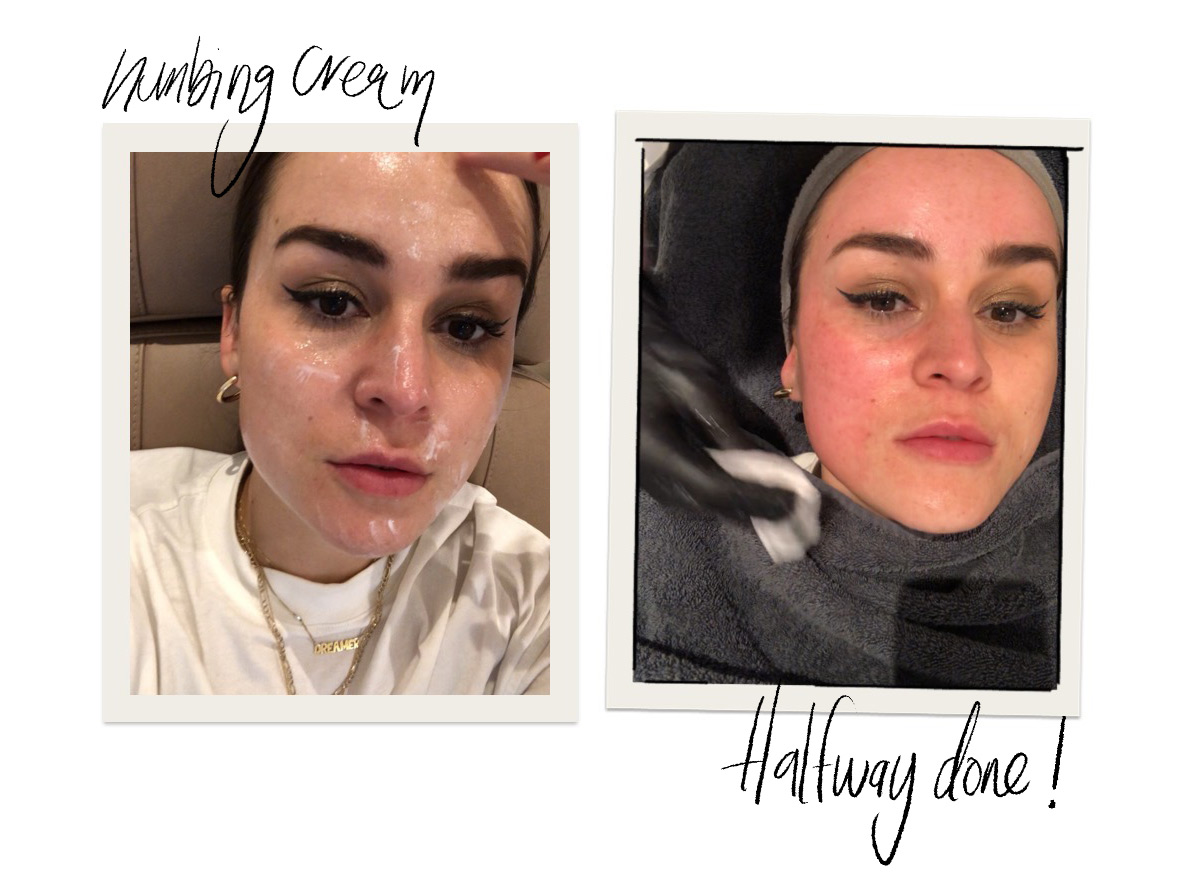 What followed was not nearly as bad as I was imagining to be honest. The numbing cream helps a lot but the pain is VERY tolerable. I felt the most discomfort around the forehead area -because it’s low fat content-, but overall, I didn’t find it particularly painful (if you have low tolerance to pain, just ask for a little more numbing cream to make sure you don’t feel it as much). 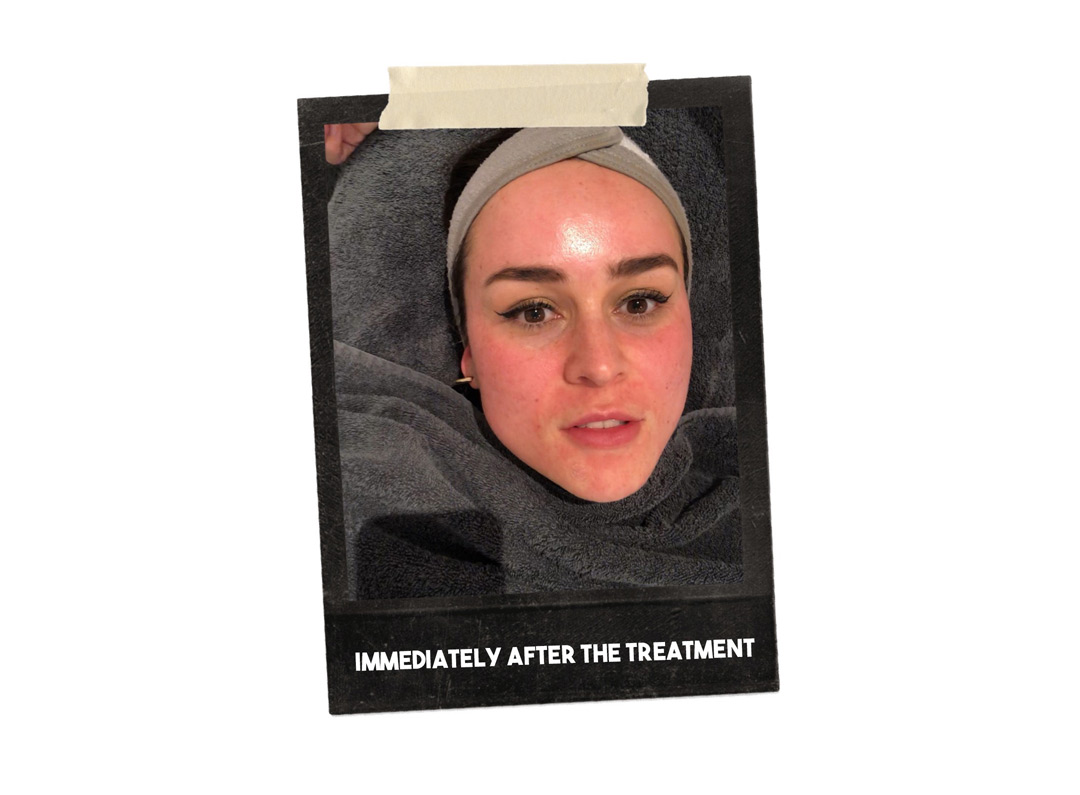 Right after the treatment, my skin got really red (as you can see in the picture and which is totally normal). I went home and I waited patiently for my boyfriend to arrive and freak him out with my red face haha…2 hours post treatment, the only thing I felt was as if I had been in the sun for too long and by then, the redness started to go dow a little bit.

The photo with the towel on my head was one day after the treatment and by then, my skin was feeling more tight and plumped, I also noticed this amazing glow coming through. It’s quite common to peel on day 3/4 after Micro-Needling and to be honest, my peeling was super minimun which is why I didn’t photograph it, because there was not much to show. The last photo was taken last week and I wasn’t wearing a drop of foundation, just my trusty moisturiser and most importantly SPF.

Micro-Needling is an amazing treatment to improve overall skin texture and I am already starting to notice the benefits. My goal with these treatments is to reduce the appearance of my small acne scars and my overall complexion. 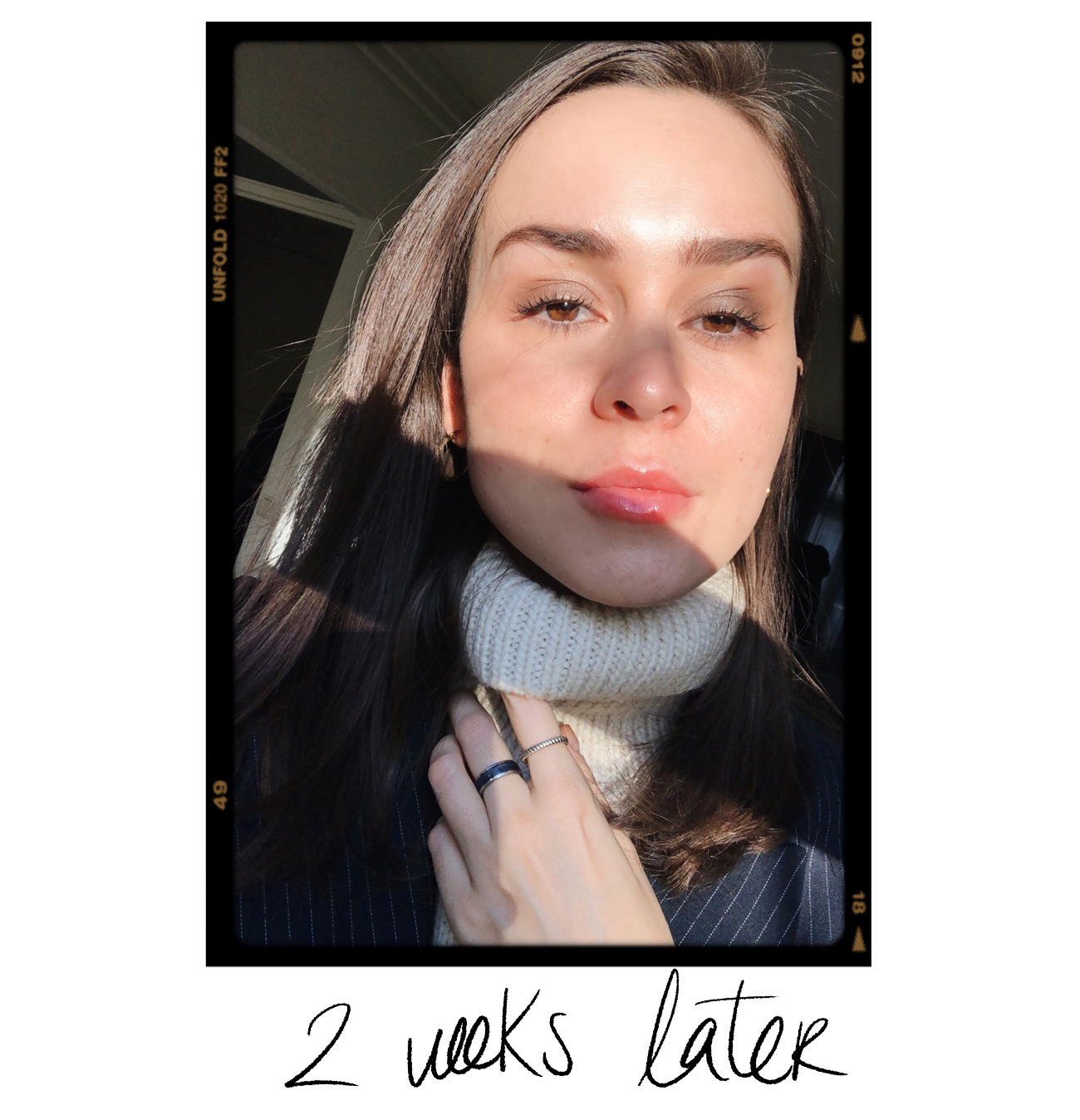 If you have been wondering for a while if you should Micro-Needle, my absolutely genuine advice is GO FOR IT! Don’t let the fear of needles hold you back, its not as bad as they might have you think and also, once you see the results on your skin, it will ALL BE WORTH IT!

You can watch the whole process in VIDEO on my Instagram stories under the “Skin Improvement” highlight.

11 thoughts on “I TRIED MICRONEEDLING, BUT DOES IT WORK?”

This site uses Akismet to reduce spam. Learn how your comment data is processed.